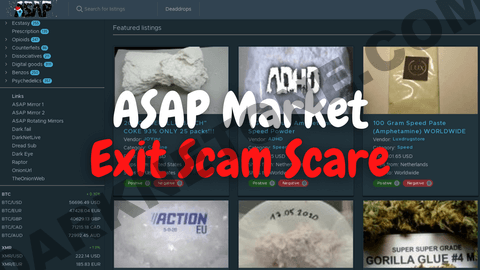 ASAP Market has grown a lot in the last few months, especially since the latest exit scam of World Market and retirement of CannaHome, and as such it has encountered a constant DDoS attack that has caused the market to be offline for most of the time.

A recent post on Dread a user by the name ‘spaceman222’ has published a post claiming of withdraws and deposits not showing up in users accounts, what is usually a clear sign that a market is performing an exit scam (taking all the user funds and shutting down the market), in the post he linked to a few users who claimed that their deposits or withdraws do not show up.

While those kind of claims can be attributed to users getting their funds stolen by phishers, this time all the deposits or withdraws that have been made in the last few days have not been credited, meaning there is indeed a problem on the site.

While it took some time to the ASAP Market admin to address the issue, he finally addressed the issue and solved the problem.

Under a post of title ‘The one fucking transaction caused this shit-show‘ he claims that one transaction of a user that did not processed properly- ‘The transaction id was legit but for some weird reasons it failed‘, the markets admin has announced that all of the deposits or withdraws were fixed and this claims was confirmed by HugBunter (Dread forum admin)-

It seems that after the confirmation from HugBunter this issue has indeed been solved and it is once again safe to shop on ASAP Market, however users should still be careful in keeping large amounts of funds in any darknet market wallet since any darknet market can exit scam at any moment.