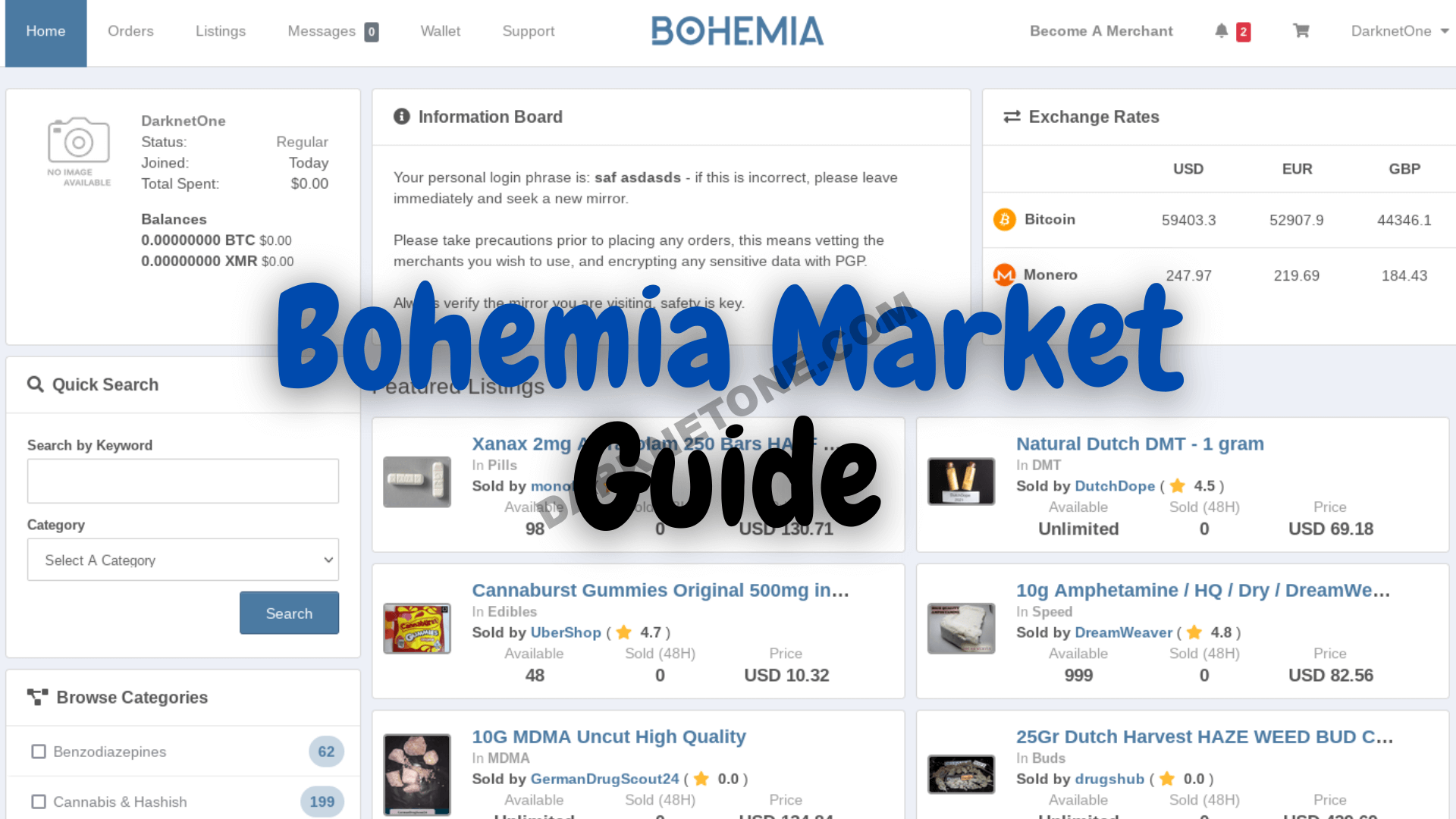 Bohemia Market is a modern marketplace designed to break away from traditional approaches of typical dark web platforms. The site boasts a host of different buyer and vendor features, with both Bitcoin and Monero integration being a critical selling point for the market.

The market recently launched its new design and development following a two year long process. This lengthy time frame was rationalized by its admin as an outcome of the fact that the darknet site was built from the ground up without employing any third party platform code.

An October 10 announcement by Bohemia admin on the Dread forum painted the picture of a high potential market. In his statement, he noted that the platform and user base was increasing at a higher rate than ever imagined – the admin attributed this success to their internal referral system as user s kept spreading word about the site.

In addition, the admin pointed out that the market had secured a recent affiliation with DarkNetStats, and that Bohemia would be revealing some upcoming promotions and giveaways.

To begin using Bohemia Market, you will need to access the platform using either the main onion address or an alternative link (provided at the end of this guide) and create an account.

Bohemia employs a smart cart system which gives the buyer full flexibility in customizing their quantity, shipping & payment methods on the go.
Both Bitcoin and Monero are accepted at the marketplace. As a prospective user, it’s important to ensure that your account is topped up with the amount required to execute any orders you may wish to place.

Notably, sellers on the market have different payment preferences – some vendors may only accept Bitcoin while others have integrated Monero. Be sure to check which coins are accepted on any products of interest prior to making a deposit.

Physical products will generally have a field underneath which allows you to submit details such as your home address. While there is a PGP option built into the market, Bohemia admin highly suggests that users disable it, and instead use your own PGP key to encrypt the sensitive information you must share with the vendor.

In case you have a coupon code giving you a certain discount on any product, you may redeem it at checkout in the appropriate field. The necessary amount will be automatically deducted upon entry of code.

Point to remember, any changes made to a quantity, shopping method, adding coupon code or even adding a PGP encrypted message to the order must result in pressing the “Update” button, or your progress will be lost. The market advises that this is extremely important as any alteration must be followed by the “Update” button as to make the changes persist.

The process of becoming a seller on Bohemia is pretty simple. You can find the “Become A Merchant” button on the right-hand side of the top toolbar of the platform (See below).

Clicking this text will present you with the progressive information pages relating to the criteria expected to be met as a merchant with Bohemia, along with market Terms & Conditions and the extensive list of features you can expect to have at your disposal.

Details will also be provided relating to the merchant bond, one-off payment and instructions on how to apply for a bond waiver for users who are established merchants migrating from elsewhere, like White House Market refugees.
Upon accepting the Terms & Conditions of becoming a vendor on Bohemia, the relevant bond will be deducted from your account balance and your new role will be initiated immediately.

Importantly, established vendors can select the option to apply for a free vendor bond on the vendor bond payment page. To do this, ensure that you have attached your PGP key correctly to your account, and that it matches the records which can be verified on the Recon directory. Upon verification you will get the vendor role on Bohemia free of charge.

In order to communicate, a user sends the public key to all their intended message recipients. This would enable them to lock sensitive information that they may want to transmit to the user.

Finally, on receiving encrypted messages, a user would simply apply their private key in unlocking messages sent by their contacts.

Bohemia Market recommends that all users encrypt all their communications using the PGP protocol. Although the market’s user records are stored and hashed using complex algorithms, one should always endeavour to be safe than sorry.
When attaching sensitive information to an order for a merchant to see, such as your physical address, be sure to encrypt the contents by either using your PGP tool of choice along with your chosen merchants PGP key, or simply ensure that the “Encrypt Message” checkbox remains selected when placing your order, and Bohemia will conveniently encrypt your data using the merchants registered PGP key. This can also be achieved when sending private messages to other users via the platform.

To use our free PGP key creation, encryption & decryption tool, click on the following link:

As a general rule, you should never share your private key with anybody.

Once an order has been fulfilled and marked as finalized, both buyer and merchant parties will be presented with the option to leave feedback from within the order details page.
Buyers can rate the products quality, overall logistics, and merchant communication for the purchase in question via the use of our star ratings feature, along with a brief snippet of text detailing their experience or discrepancies.

Aside from the above, the buyer can also rate their purchase as “Positive”, “Neutral” or “Negative”. This rating will attribute to the product and merchants feedback score and overall level on the platform.

Each buyer rating can be found when viewing a product page, and via the corresponding merchant profile. Although publicly viewable by any member on the platform, usernames are censored to protect buyers and their rights to customer confidentiality.
It’s important to leave feedback on any orders placed, as it can and will be used by other members of the community to vet a potential vendor that they are considering to purchase from.

Likewise, merchants also have the ability to provide feedback for buyers which have purchased from their store. This will provide merchants the ability to voice any goo word / concerns and positive / negative comments towards a buyer to give other merchants and users an insight as to how they conduct themselves when purchasing.

Bohemia implements an affiliate program that’s been designed to reward those who invite users to the dark web site prior to their registration.

These funds will automatically be credited to your balance and can either be withdrawn or used as a spendable balance.

Your personal referral invitation link can be found in the “User CP” alongside the associated statistics, as well as inside the “Affiliate Program” widget, located at the bottom left hand side of the homepage.

Anyone looking to buy or sell through Bohemia market must read and understand all the rules that have been prescribed by the platform’s admin – these rules are meant to ensure that everyone had a pleasant and safe experience trading in the marketplace..

Users whose actions will be found to be in contravention of the Bohemia Market rules will face disciplinary action. As described on the site, immediate non-appealable action can be taken against both buyer and vendor accounts.

Bohemia’s banned listings ensure that harmful items and services stay out of the market. Any vendor or buyer who is found to conduct business or facilitate communication about the goods and services will have their accounts terminated.

To guarantee that this rule is followed to the latter, the site has implemented a word filtering system that’s designed to alert Bohemia’s staff about any potential communications, discussions and dealings that may involve any of the items in the list of banned goods and services.

Having said that, all Bohemia users are prohibited from engaging in the buying and selling of the following items:

For now, the official link to Bohemia Market is:

There are several different ways to ensure that the mirror which you are currently visiting is in fact a genuine mirror operated by Bohemia.

First, you can input “/mirrors.txt” after .onion of the URL currently displayed within your address bar. Here you will be able to see a list of the current and active mirrors, alongside an encrypted message using the official, and only PGP key associated to Bohemia.

The market’s official PGP key can be located via trusted sources such as our official sections on DarkEye and Raptor, or by visiting “/pgp.txt” the same way as per mentioned above when viewing “/mirrors.txt”.

If the PGP message cannot be decrypted using Bohemia’s public official PGP public key, and / or if the mirror you are currently accessing the platform from is not visible within the encrypted message, the admin suggests ending your session immediately.

You’ll also notice that all captcha images presented throughout the platform will contain the last 26 characters of the mirror for which you are currently visiting. If the 26 characters presented within the captcha image does not match that of the mirror currently being visited, admin advises that you end your session immediately and seek a mirror from one of the aforementioned trusted sources.