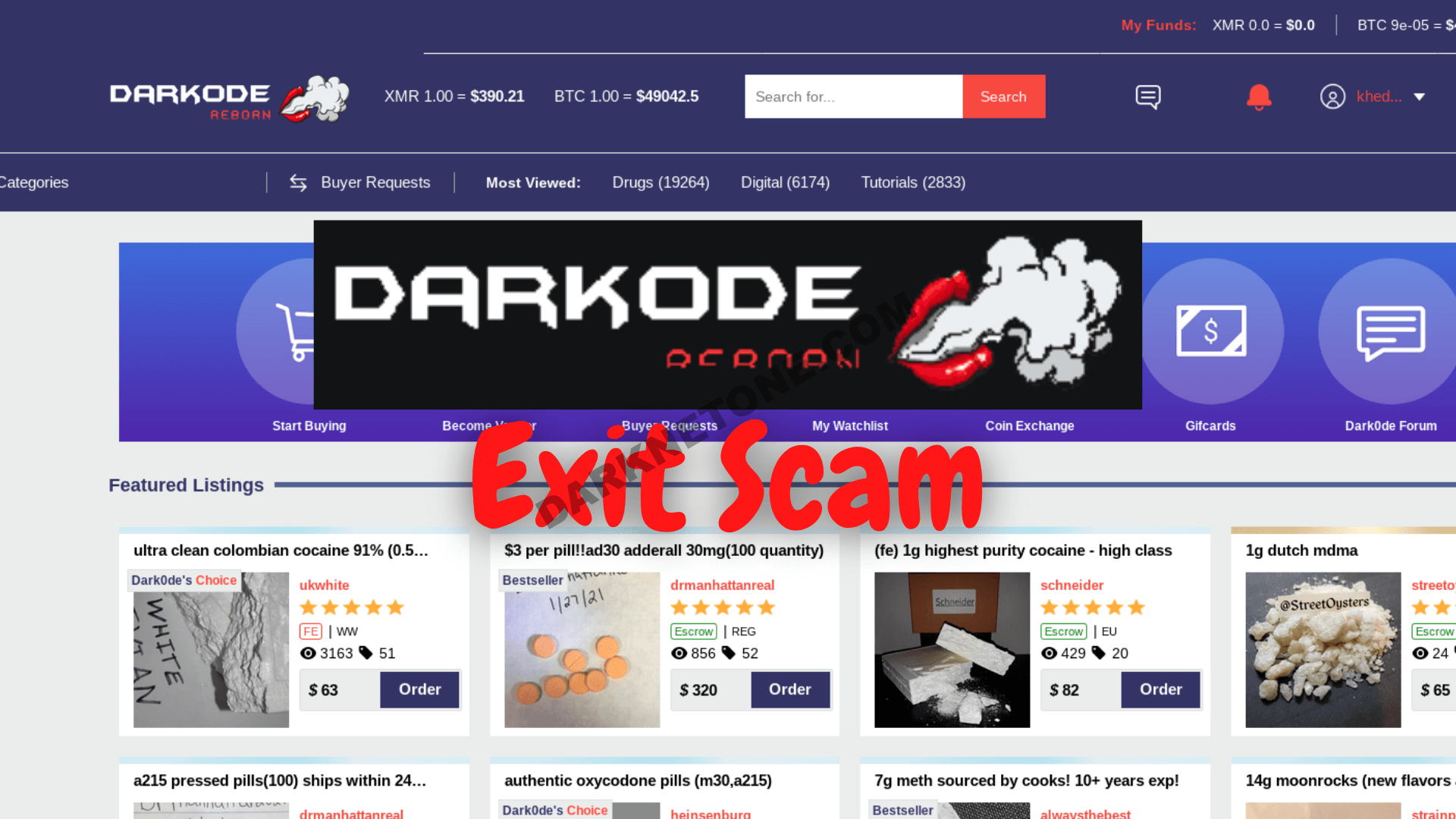 UPDATE: as of 23.2.2022 Dark0de Market has officialy exit scammed and is gone for good.

Over the last few months many darknet markets have either voluntarily shut down operation, or performed an exit scam. First, in October, White House Market has shut down, shortly following by Cannazon and ToRReZ Market. Just a few weeks ago, in early 2021, Monopoly and Cartel Market has both suddenly went offline and did not come back.

Over the last few weeks a few dozens of vendors have accused Dark0de Market of freezing their accounts, stealing their funds and not responding at all to support tickets, those are just a few examples of the accusations of vendors of Dark0de Market.

The orders in escrow were cancelled and refunded, that’s acceptable.

However, the $2000 in my wallet I was blocked from withdrawing a week before the ban. Most of this money I deposited in from my own funds for ads and promo on the front page, this is my money.

I’ve asked /u/Dark0deReborn several times about how I can recover these funds, I was banned from both sub-dreads, and now my messages are ignored.

I’ve reached out in every possible communication channel, I’ve been polite, I’ve been concise. I just want my money /u/Dark0deReborn please and thank you.

You say that you don’t steal from vendors, this money you have stolen.”

One vendor have wrote that over 10 vendors have been banned just last week with his own account having 6,000$ on the market, with the excuse of him not responding to disputes.

Earlier today i politely asked them why another vendor was tagging my name in their listings, apparently thats fine?

Now theyve stolen all my escrow money and closed my diamond account.

They closed my support ticket with no reply.

LittleBits, one of the biggest vendors in the darknet world with over 7500 sales, and just 1 bad review account has been banned as well with no reason given and his account has even been banned on Dark0de Market forum and his message deleted there.

Our withdrawals have been disabled for over a week. Contacted support they said we had reports that 2 customers received empty parcels (this was 100% a Royal Mail issue – but fair enough, we will take responsibility).

Straight away I got these parcels reshipped anyway. Both landed and customers changed their feedbacks back to 5-star. Happy days.

5 days later our withdrawals are still very much disabled.

Support finally responded earlier to say we are on a 2-week trial to see how things go. Definitely wont be taking orders during this “2-week trial” so I’m not sure what happens next.

It seems as though our funds (~$10k) will be held as ransom in the mean time. If you do end up stealing it, maybe pay your devs enough to implement a dispute system for FE orders. This could of all been settled in a dispute fashion rather than like this.

Another vendors withdraws have been disable, with 10,000$ held in ransom for a “2 week trial”, all the while his rating are a perfect 5 star.

Users Not Able to Withdraw Funds

One of the signs of a darknet market starting an ‘exit scam’ is the market halting all withdraws, while allows deposits as usual. Dark0de Market has been notoriously bad and sending users their funds, simply because all the withdraws are processed manually by the markets admin, however in the last few weeks it has gone to the extreme with users and vendors have to wait for over 48 hours at best, while some users withdraw has never been processed.

I had made one order prior to this one on Dark0de reborn with this vendor with no issue but I made a BTC direct payment for an order today (over five hours ago now), and I’m still getting the message:

“Confirming…
Your deposit, 0.0065631 btc has been recognized by our system and is now confirming. Once the required amount of confirmations is reached, your order will be sent to the vendor for further processing. Reaching the required amount of confirmations can take several minutes up to several hours depending on the transaction fee you paid. Thank you for your patience.”

The transfer definitely went through but I’m getting worred now to be honest after catching up on a few reports about Dark0de Reborn.

Has anyone had this happen to them and then eventually had the order show up as paid or am I fucked and if so HOW?

One user have been waiting for almost 24 hours for his deposit to show up in his account, with many people confirming in the post the long delays on deposits and withdraws on Dark0de Market.

Another user has waiting for 40 hours for his Monero withdraw to show up in his own wallet, and also pointed up the hidden fees that Dark0de Market has on vendors the causes users to pay around 8% on fees (while the darknet markets average is around 4%).

Many more users have shared their own experience with Dark0de Market slow withdraw times pointing out that Monero have very low fees on transaction and virtually no waiting times in block confirmation.

While usually darknet markets admins have been professional in their response to accusations of theft, Dark0de Market admin seem to have taken a different approach in response to the many complains over withdraws and deposits times (as well as banning vendors and stealing their funds for no reason), and simply decided to post laughing emojis without responding at all to the accusations.

It seems now inevitable that Dark0de Market is preparing for a planned exit scam, with both deposits and withdraws process time approaching over 48 hours in some cases and the familiar excuses of a “DDoS attack” responsible for the delays, vendors who are been banned for no reason while their funds are been stolen and non responsive support and market admin.

We are highly recommend users in withdrawing their funds and checking other top darknet markets who process deposits and withdraw without delay.

12 thoughts on “Dark0de Market Scamming Vendors and Users, Prepares For an Exit Scam?”