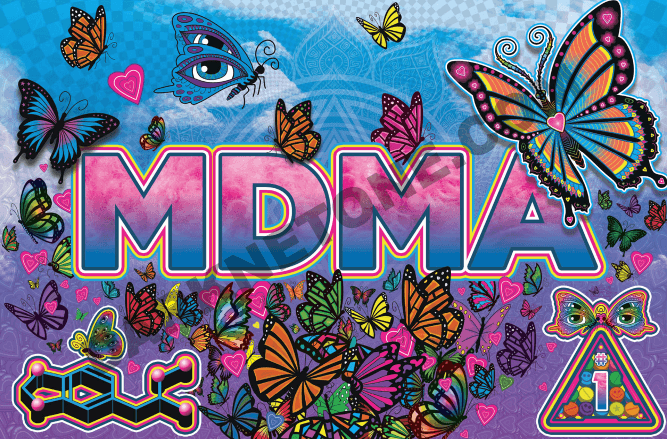 In this article we review a class of recreational substances known as Empathogens, which contains one of the world’s most popular drugs of all-time, Ecstasy. We review the effects of these substances, their side effects, dosages, and provide you with a brief history of how they came to be. We also discuss some top darknet markets that carry empathogens and trusted vendors who listed them.

Note: This article was written for research purposes and is not intended to be construed as literal advice.

What is an Empathogen?

Empathogens, also known as Entactogens, are drugs that share the common characteristic of enhancing empathy, feelings of closeness, as well as the sense of touch. They can also have strong psychedelic and stimulating effects. The most well-known empathogen by far is Ecstasy, one of the most popular recreational substances of all time. Ecstasy is chemically known as methylenedioxymethamphetamine, or MDMA, a substituted phenylethylamine first synthesized by Merck in 1912.

In the 1970s, MDMA was rediscovered by chemist Alexander Shulgin who introduced it to psychotherapists as a therapeutic aid for patients. Shulgin later synthesized over a hundred new phenylethylamines, including MDA, 2C-B and 2C-P, publishing a book documenting their synthesis in 1991. This book was likely the inspiration for a wave of “designer drugs” that were introduced to the club scene after MDMA had been illegalized internationally.

MDMA (Ecstasy) is desired recreationally for its physically pleasant or euphoric effects, with many users associating it with an elevated mood and increased sense of openness or empathy toward others. It has also been known to heighten the senses in a pleasurable way. As a stimulant by chemical nature, MDMA can make its users feel more energetic and mentally focused. At the same time, it can also make people feel more relaxed and less socially inhibited.

It is common for users to report hallucinatory or psychedelic experiences like those produced by LSD, mescaline, or magic mushrooms, as these substances are similar chemically and in terms of neurobiological effects. Empathogens tend to excite the transmission of serotonin and dopamine in the brain, whereas psychedelics primarily excite serotonin pathways and stimulants excite dopamine pathways.

The most common side effects produced by MDMA and similar substances include high blood pressure, increased heart rate, anxiety, teeth grinding and/or jaw clenching, nausea/vomiting, difficulty concentrating, and paranoia. At higher doses, MDMA can cause severe body temperature disturbances, seizures, loss of consciousness, and a number of life-threatening conditions including organ failure.

If this is your first time taking an empathogen like Ecstasy or 2C-B, you’ll want to start off with a light dose. We also recommend dosing with a partner if you are a beginner; preferably someone who has taken these substances before and can guide you if things should get unpleasant or uncomfortable, for whatever reason.

“Onset” refers to the length of time before the effects of the substance become noticeable, and “Duration” refers to how long the effects usually last.

Keep in mind the amounts displayed above are calculated for the pure chemical, and sometimes pills contain adulterants or other substances intended to mimic the primary drug. Good vendors will label their products accurately, which is why we recommend sticking only with experienced, well-trusted vendors when making purchases on darknet markets.

Another thing to bear in mind is that those with lower body weights will likely be more sensitive to the substance and require a smaller dosage than normal. Similarly, larger people may require slightly higher dosages to achieve the same effects felt by someone of average body weight. Both body weight and stomach contents can determine the length of onset, as well. This means that if you ingest a pill on a full stomach, it will take longer for the effects to become noticeable.

Ecstasy is most commonly taken orally, in pill form. It is also possible to insufflate (snort) it, which will ensure a rapid onset of effects and require a smaller dose to be felt. It is technically possible to vaporize it, but it is an uncommon practice that may result in an unnecessary waste of product. Those with sensitive stomachs will want to take the pill after a meal, preferably with a glass of water. If you are unsure how your body will react to the substance, start with half a pill and wait an hour before deciding to take the other half.

The following are some tips for having a positive experience with empathogens, and how to minimize the severity of negative after-effects.

For information about empathogen abuse and addiction, a comprehensive list of warning signs can be found here.

As it is one of the most popular recreational substances ever, just about every darknet market carries some listings for Ecstasy. Not all markets are trustworthy, however, or manage to attract high-quality vendors. Below are a few markets that have built up a positive reputation over the last couple years and support thousands of listings for MDMA and related chemicals.

Products can be found in three main forms: pills, powder, and crystals. The branding of Ecstasy pills plays a highly important role in its marketing as it gives the consumer an idea of what to expect when ordering that pill. There are now hundreds of different Ecstasy pill brands, shaped from everything like Flintstone’s vitamins to Donald Trump’s head. MDMA, MDA or 2C-B powder and crystals should only be used by those with a great deal of experience, who know how to properly measure dosages on their own (this definitely requires a finely-tuned scale that can measure substances down to the milligram).

Below is a list of some of the most popular and highest trusted vendors of Ecstasy, MDA and 2C-B across the darknet, along with the markets on which they operate. These vendors have thousands of sales under their belt, many across multiple markets, and are regarded as highly competent in their profession. They tend to offer high quality products that are reliably shipped and have the customer reviews to prove it.

While comprehensive and a good beginner’s guide, this article is only the tip of the iceberg when it comes to Empathogen-related information. It is smart to arm yourself with knowledge about a chemical before consuming it, and we encourage you to expand your knowledge base.

Some of the information presented in this article was collected from Erowid, a long-standing non-profit resource for the study of psychoactive substances and experiences. Erowid’s MDMA Vault contains an extensive collection of information about MDMA, including hundreds of “trip reports” written by users describing their experience with the drug.

Other popular websites with reliable information about MDMA, MDA, 2C-B and other empathogens include: