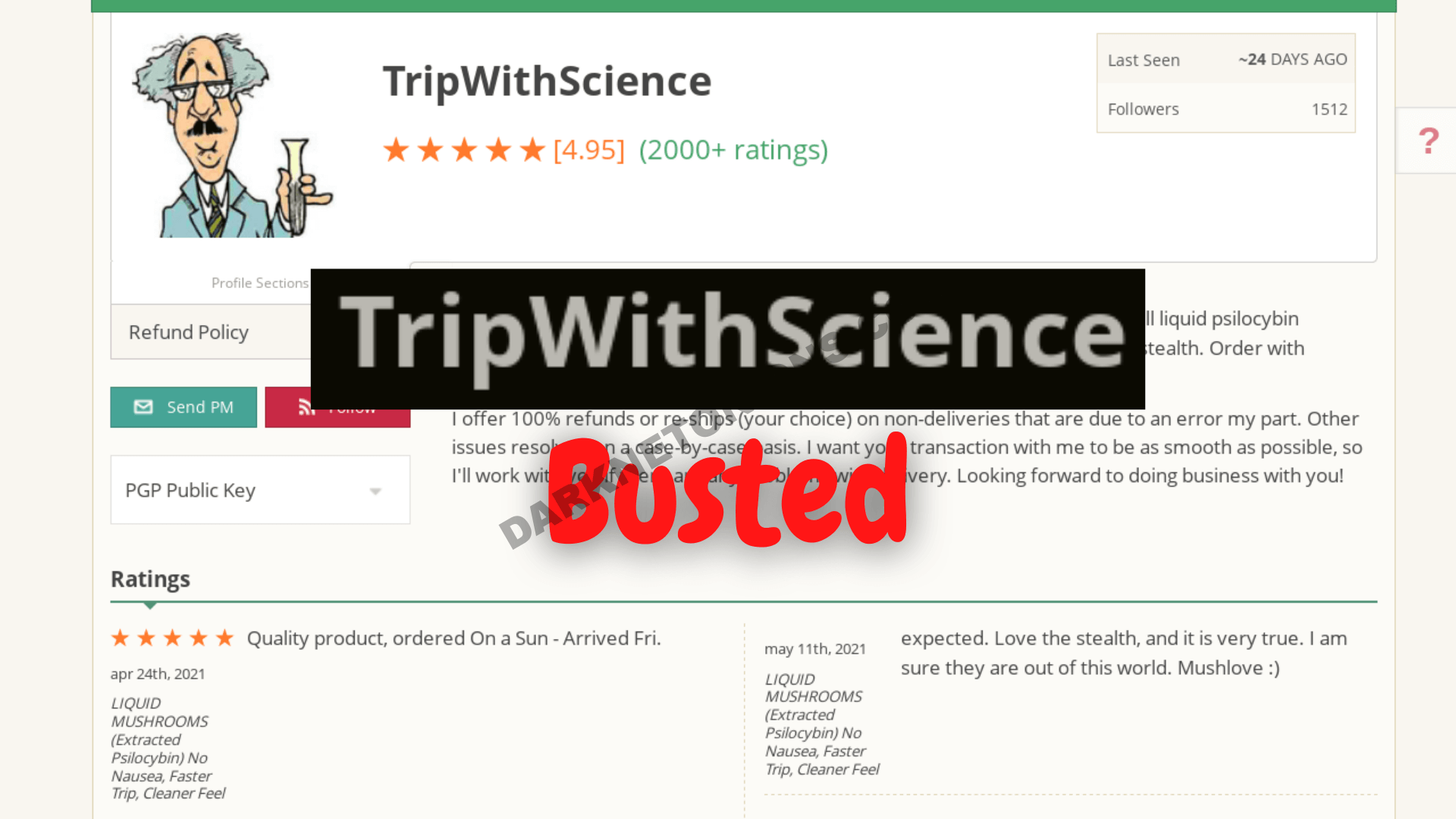 TripWithScience has been selling the same product since 2011, vials contain Liquid Mushrooms (Psilocybin extracted from PSILOCYBE CUBENSIS mushrooms in a clean ethanol/distilled water solution) that were priced at 19.95$ for 1 vial with discounts on large amounts.
As Trip explained on his profile:

“Liquid Mushrooms” are simply the psychoactive element of Psilicybe Cubensis Mushrooms (Psilocybin) but extracted in its pure form, separated from all of the fungal material, spores, and fungal defense mechanisms that mother nature evolved to cause nausea in mammals (like you!) so that their spores could survive a mamilian digestive tract.
Each 10ml vial contains ~9mg of Psilocybin (equivalent to the Psilocybin content of 2g of dried shrooms).
So one vial contains enough psilocybin for a fun, solid trip, with plenty of visuals. If you are light weight (under 130 pounds) you might only need ¾ of a vial.

On October 22, 2020, HSI Columbus received information from a seized Dark net Marketplace that contained over 30 Bitcoin transaction to a wallet belongs to TripWithScience, after a subpoena to Coinbase revealed that the withdraw address belonged to Matthew Taylor Barlow. according to the data from Coinbase he has sold over 300 btc valued at $717,461.27 and only made 1 btc purchase (valued at 188.94$).

Coinbase subpoena information also revealed numerous times that Barlow made purchases of materials used to pack and ship his product all over the world.

With this lead, investigators followed Barlow and managed to intercept many packages send from him, including a few that were sent as his other alias “PERFECTSHROOMS”. Search warrant was issued to Google to obtain the content of his Gmail account [email protected] where investigators found many images some that showed containers and bags of mushrooms with the cartoon scientist icon of “TRIPWITHSCIENCE” and the script “u/TripWithScience” written underneath.

After searching his Google Drive information investigators also found a spreadsheet named TCS Accounting with tabs going all the way back to 2014 with expense and income reports from various darknet markets and vast amount of information on his vending days. According to the spreadsheet his yearly income rose from $211,019.52 in 2014 to $2,814,606.25 in 2021, while his total value was $4,378,974.48 as of 2020.

Matthew Taylor Barlow made many OpSec Mistakes, similar or worse to ones made by Ross Ulbricht or Alex Cazes and is the last big bust in the darknet markets community since Dark Market was seized earlier in 2021 and probably not the last.