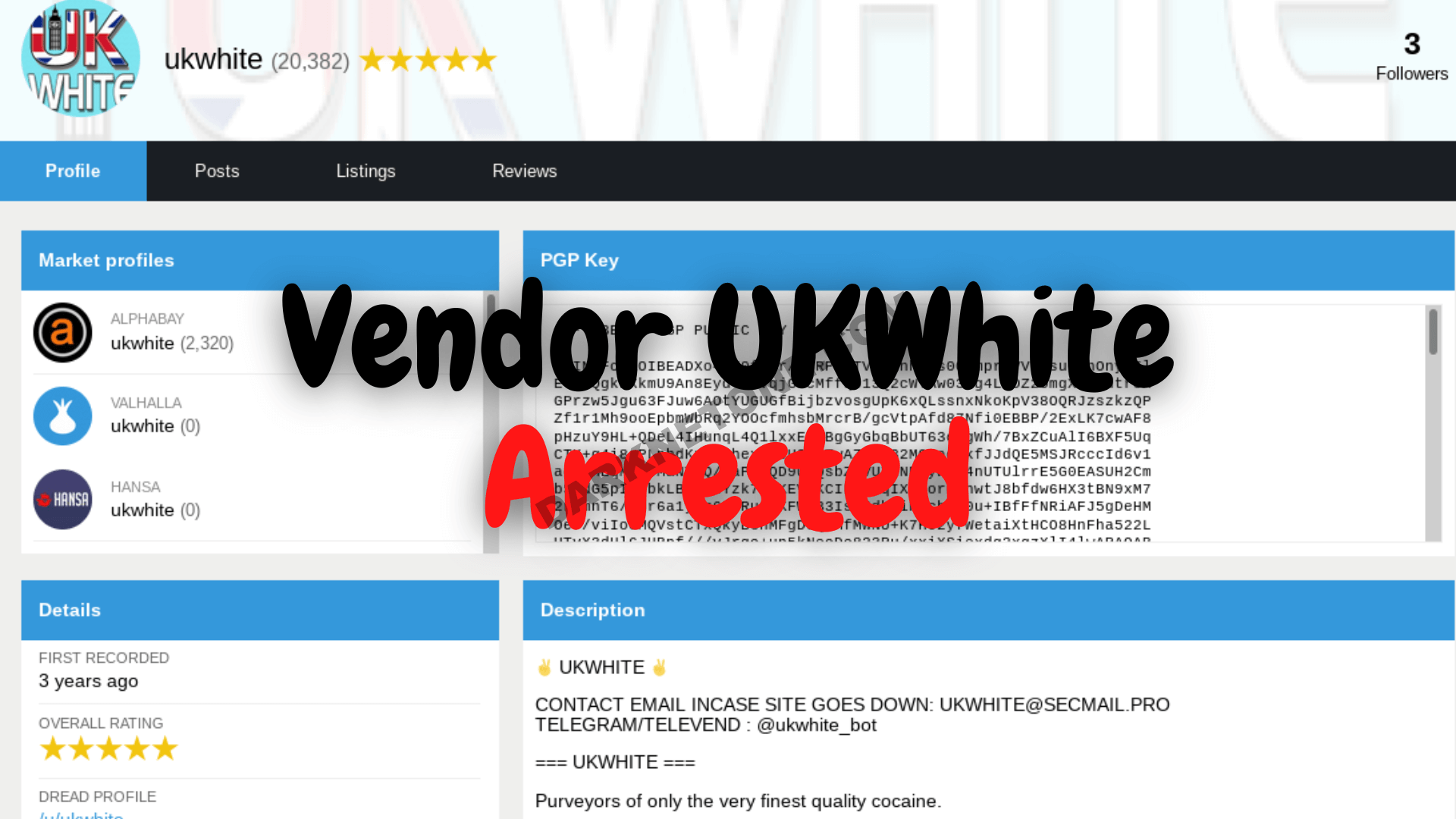 Famous vendor UKWhite was arrested back in October 2021 in Madrid Spain, according to newly released court documents.

UKWhite is one of the biggest vendors on the darknet, with over 30,000 total sales since 2013 and have been vending on over 20 different darknet markets. Among UKWhite listings are MDMA, Cocaine and Ketamine.

2021/10/25: Two properties (a house and an industrial unit) owned by the suspect in Marbella (Spain) are raided.

2021/11/29: The US Embassy in Spain officially sends the extradition request. They send some legal documents, including a copy of the formal accusation by a District of Columbia court dated 25/05/2021, an arrest warrant by the same court from 13/08/2021, and several profile pictures from suspect’s accounts in Wirex, Xapo.com and Binance.

2022/01/21: Suspect is brought to court. He does identify himself as the claimed person, but denies all the charges and doesn’t agree with the extradition.

2022/04/19: Hearing trial starts. Suspect is accused by the DEA of introducing more than 5kg of cocaine into the US, while operating the UKWhite account.

According to the court, the suspect allegedly was the leader of a drug trafficking and money laundering organization between 2013 and 2021. He sold Bolivian and Colombian coke using the darknet, and got Bitcoin and Monero in exchange, which he later laundered. He allegedly sent more than 38000 parcels, and 799 BTC are attributed to him.

According to the court in Spain UKWhite is still active on various darknet markets such as AlphaBay.

Signs of his arrested can be seen back in October of 2021 when concerned buyers of UKWhite have complained that he disappeared for a few weeks and then came back with much different quality of product.

One user wrote on Dark0de Market sub under the headline “Where is UKWhite” – “Not logged on since 23 Oct and usually super active. Anyone having issues on other markets?” with a response by Dark0de admin – “UKWhite contacted the Dark0de Team that he will be on Vacation mode for a few days. All open orders will be fully refunded, no worries.“

UKWhite did not log in for a few weeks and then came back like nothing changed, but the complaints have started shortly after when in December of 2021 a user published on Monopoly sub a post under the headline “UKWhite? More like UKShite” – “Do not order from UKWHITE. Before he had good quality, then he mysteriously disappeared and is now back with slashed prices, apart from on 0.5g and 1g. Theres a reason for this – its fucking shite subpar gear. Stings like fuck and blocks your nose, great. Clearly something happened with his source and he cant get the same shit so tried to reduce his prices to reflect it but its not worth it. Look elsewhere for premium.“

The Monopoly admin has gone on a complete rundown of UKWhite activity where he emphasis that he is sure that the account now belongs to a different person who sells complete different product, meaning his account gone taken over by a friend or partner.

UKWhite is awaiting his extradition process from Spain to the USA now, we will keep updating about his situation and sentence.