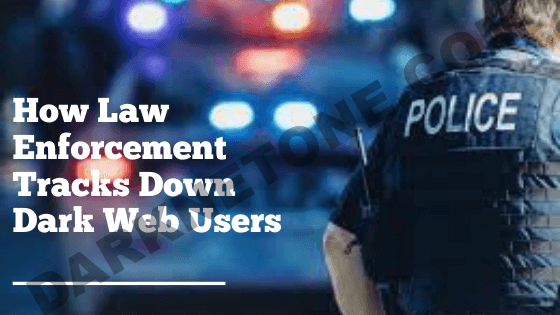 The dark web economy continues to thrive amid periodic law enforcement disruptions. This unsuccessful police feat it tied, in part, to the extensive use of technological mechanisms to ensure that vendors and buyers operate under the veil of anonymity.

Global governments and law enforcement agencies have invested massive human and capital resources to destroy the seemingly-unstoppable wave of darknet activities that have created millionaires and losers alike.

Indeed, even in the face of aggressive police action against the dark web, it appears that underground marketplaces are headed into a bright future. Law enforcement agents have been hard at work trying to identify and convict dark web drug dealers, weapon buyers, child sex abuse masterminds and weapon traffickers.

Against this backgrounds, you may be tempted to think that law enforcement has given up – but police and justice departments have been using a number of techniques in an effort to track down dark web users and bring them to justice.

Even before considering how law enforcement tracks down dark web users, a number of vendors and buyers may get busted because of their sheer carelessness. There’s a number of mistakes that a user should avoid – not using a strong VPN is one of them.

The other mistake can stem from dark web vendors and buyers trusting Tor a bit “too much” by forgetting to disable javascript when visiting underground sites where illicit goods are being sold or shared. Using a secure Linux operating system like Whonix has been found to be among some of the quick strategies to be considered by users looking to ensure that they stay away from the watchful eye of the law (See Below).

Having said that, the following section will take a close look at how law enforcement identifies supposedly-anonymous dark web users even if they decide to enforce strict OPSEC.

Undercover operations happen to be a favorite technique among many law enforcement establishments. Like traditional investigative mechanisms, going undercover on the dark web accords agents with first-hand experience on darknet activities.

In the first Silk Road case, law enforcement agents infiltrated the dark web platform and successfully took over the online account of a staff member. The imposter had managed to gain so much trust with underground actors that they were able to secure invitation to the platform’s replacement in 2014.

It turns out that the police planted an informant into deep underbelly of the second Silk Road, engaging directly with the darknet market’s owners, and supplying incriminating pieces of evidence to other law enforcement agents.

The other example of how law enforcement agents can use underground operations to track down dark web users can be seen in the Australian case involving law enforcement agents that assumed the role of a notorious child sex abuse platform admin for months – the undercover operation culminated in high-profile pedophile arrests across the world.

Generally, it appears that law enforcement agencies have taken advantage of the anonymity attributes of the Tor network to blend in with unsuspecting dark web users. It’s important for all dark web users to stay vigilant of who they engage with online.

You may be surprised to realize just how popular the mail system remains to be a favorite delivery channel for dark web drug dealers. This is notwithstanding the technological sophistication of the darknet value chains that are marked by anonymity software and digital currencies.

In order to make use of the postal system and regular couriers, dark web dealers employ a number of techniques to guarantee the stealth of their products in transit. This includes packaging methods that ensure that illicit parcels move past the hawk-eyed customs officials.

Still, even with years of experience up the dark web traders’ sleeve, law enforcement agencies have been tracking down dark web users by investigating the origin and destination of mailed items.

In fact, post boxes and offices are currently considered to be ideal surveillance environments used by law enforcement agencies to solve complicated dark web crimes involving use of the postal address to move darknet wares from one point to another.

Take the example of the Silk Road case where the authorities intercepted a number of drug packages from a Silk Road vendor known as Steven “Nod” Sadler in 2012. Then, post office workers were able to solve the dark web case after identifying the defendant’s girlfriend who posted regular parcels across the Seattle area. It turns out that Jenna White, Saddler’s partner, was successfully identified from her hand-writing that resembled that on the packages – reports indicated that law enforcement managed to close in to the case after gathering evidence from the post office cameras.

The case would take an interesting dimension in 2013 after the U.S. Postal Service (USPS) opened a package to discover 500 grams of a substance that would later be identified as stimulant methylone. The law enforcement agents caught up with their suspect after pulling off a controlled delivery.

Dark web activity is synonymous with Cryptocurrency – all transactions across darknet platforms use either bitcoin or the other forms of virtual currency. The concept of crypto transactions is pegged on the pseudo-anonymous aspect of bitcoin where buyers and sellers can hide their identities.

However, recent advances in law enforcement technology has equipped agencies such as the Homeland Security Investigations (HIS) with the tools needed to lift the veil of anonymous dark web transactions.

Years ago, the U.S. Department of Homeland Security launched a taskforce that would be focused on tracking down dark web money laundering that is being enabled by bitcoin and other digital assets.

Another look at the high profile Silk Road case involved the analysis of blockchain evidence by law enforcement agents. The information was effectively used to convict Shaun Bridges, a Secret Service operative who was alleged to have scammed Silk Road staffers during an investigation into the dark web marketplace.

In the case, the court learnt about how thousands of bitcoins were moved from Silk Road into an account belonging to the law enforcement agent. Investigators went further to map out the movement of the Cryptocurrency by following the money to reveal wire transfers that were traced to a company belonging to the defendant.

Importantly, law enforcement agencies have been tracking dark web users by leveraging on Know Your Customer (KYC) regulations that compel crypto exchanges to gather precise information about the identity of their clients.

In order to avoid this problem, dark web users should be critical about where they by crypto by ensuring that they identify peer-to-peer exchanges that do not implement KYC protocols.

To conclude, as a general rule, be sure to read our guide on how to use dark web markets to learn about how you can trade on the dark web with full capabilities to avoid brushing your shoulders with the law.