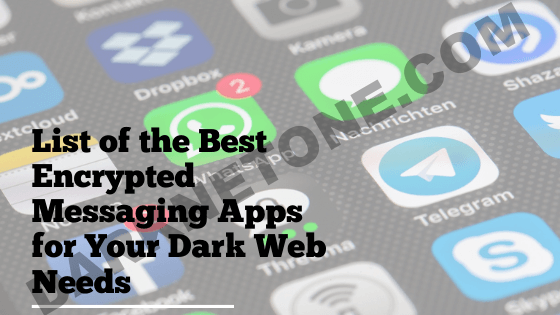 Encrypted messaging apps employ a method of encrypting data that ensures online privacy in communication. By utilizing the concept of end-to-end encryption, the apps prevent the viewing of messages by third parties as senders and receivers are the only ones that can decrypt and read messages.

Essentially, without end-to-end encryption, private communication between senders and receivers may easily be read by the respective tech company that built a particular app, or even accessed by bodies looking to gather private data from citizens.

It goes without saying that end-to-end message encryption promotes free and fair societies that enjoy the freedom of expression as far as civil liberties are concerned. Although governments have been working hard to strip their people of this right, several encrypted messaging apps have been thriving – especially for dark web users who value online privacy.

What Are the Most Recommended Apps?

Considering the increasing number of encrypted messaging apps in the market, we have compiled a list of 5 most recommended products for your dark web needs. The good news is that a host of these platforms are free to use.

Technically, Telegram and OTR are not messaging apps based on how they are built. They two tools operate symbiotically in providing a safe and secure communication channel to users.

The main attribute of Jabber/OTR is the fact that they can be configured anonymously, which eliminates the requirement for users to provide their phone numbers during registration. The same goes for any other personal identifiable information (PII) that may compromise the user privacy.

As a downside, Jabber/OTR was not well-optimized for mobile application when compared to other encrypted messaging options. This weak point is pegged on the fact that Jabber/OTR depends on a clear and uninterrupted connection between a message sender and receiver.

Although common among dark web users, it’s hard to ignore its lack of supporting features and a user interface that may appear complicated to a section of users.

Nonetheless, we highly recommend this encrypted messaging platform for people looking to benefit from a protocol that’s robust enough to keep off even the most formidable cyber adversaries.

Wickr is a free encrypted messaging app that enables users to communicate with other Wickr accounts through self-destructing messages. Likened to a “more secure Snapchat”, Wickr supports the exchange of texts, images, videos and voice.

The encrypted messaging tool has been praised for its robust user privacy measures that prevent the leaking of metadata such as geotags. Wickr users are also allowed to set the time it takes for messages to self-destruct, and benefit from additional layers of security guaranteed by a video-key verification system.

Nonetheless, the fact that Wickr was purchased by Amazon recently has become a cause of concern for some users who feel that their sensitive data may suffer from the retail firm’s notorious cyber reputation.

Signal is one of the most praised encrypted messaging apps in existence. Privacy advocates such as the world-famous Edward Snowden have commented on Signal’s suitability as a highly secure messaging tool.

According to cybersecurity commentators, Signal encryption framework is so robust that tech giants such as Facebook have tried using it for WhatsApp encryption. The only difference is that the company behind Signal is a non-profit while Facebook is a for-profit behemoth.

Signal also boasts a user friendly experience that may rival its counterparts. Specifically, a user can convey the three forms of communication to their contacts without the need to engage PIN codes or login credentials.

In addition, custom wallpapers and animated stickers have been added to the Signal user experience in an effort to normalize the general outlook of encrypted messaging. The self-destructing messages ensure that Signal users enjoy top-notch online privacy especially when browsing dark web sites.

Once a user opens the secure app, a unique Threema ID key is generated to achieve user anonymity when using the app – the app beats its rivals that demand a username upon registration.

Threema users can create their account using an email address or a phone number so that they may be found by other account holders. New users are also served a QR code that can be scanned by other people in place of exchanging usernames.

Another interesting Threema feature is the polling system that users can leverage when seeking feedback from friends and contacts.

Point to note, Threema currently survives on revenue from its paid service, which may put off some users that have become accustomed to free messaging apps such as WhatsApp or Telegram.

The other disadvantage of using Threema is that the encrypted messaging app is mainly popular across German-speaking countries – this aspect may turn out to be limiting factor to users in English-speaking countries.

Wire’s multiplatform syncing across multiple accounts and devices is also a strong selling point for people looking to differentiate their communication habits between personal and work-related engagements.

Just like Wickr, the Wire app has become a favourite among professional users, with various commentators noting its increased popularity to rival Slack and Microsoft Teams.

Wire utilizes a Proteus encryption protocol that opens the app to external security auditing opportunities as part of the app’s commitment to provide a secure and safe environment for users to convey messages.

However, 2019 reports of Wire’s holding company moving to the United States had alarmed a section of users that got concerned about the possibility of privacy breaches – Wire Swiss, the parent company, has since become domiciled in Berlin from early this year.

Telegram, which grew rapidly to achieve global popularity, has been a staple for protesters looking to mobilize as much as 10,000 members in a simple group chat. The app’s activist history may provide an explanation about the fact that has been drawing a lot of law enforcement attention in recent times.

On one hand, the messaging app accords users with the option of encrypting messages. The function can be accessed through the “Secret Chats” option as a basic step for users looking to send messages that self-destruct across their devices.

Otherwise, failure to encrypt your chat will mean that the communication will be kept in Telegram’s servers as stored data. The fact that Telegram lacks default end-to-end encryption is a big red flag that must be called out.

Cybersecurity experts note that the client-side code for the messaging app is open-source, while its server-side code is not. The app claims to use the MTProto protocol to encrypt user messages, but cases of Telegram data breaches are not uncommon.

Further analyses of the app have indicated that threat actors may use particular mechanisms to know when a Telegram user is online or offline (also referred to as “Telegram stalking”). This fact, couple with various other factors, point to an increasing cyber risk for dark web users whose online privacy and safety are top priority.