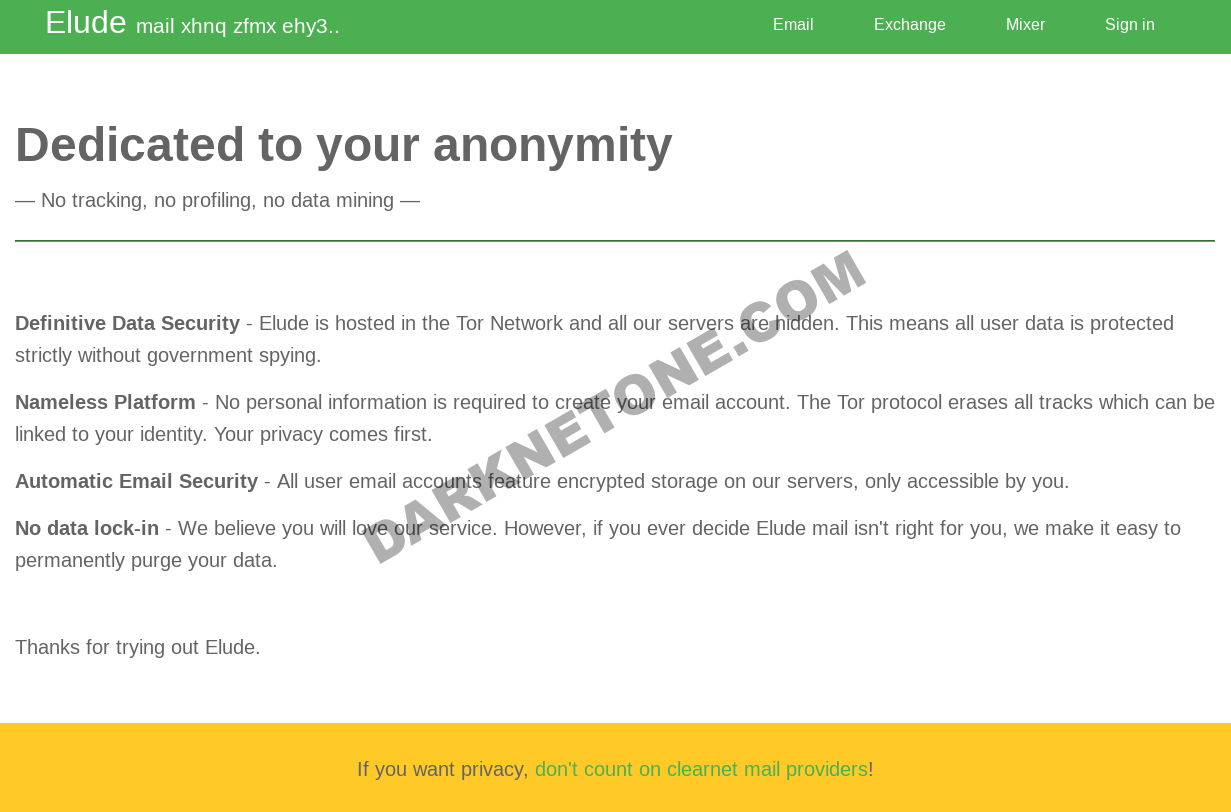 The Elude Exchange is a cryptocurrency swapping service hosted on the darknet. It is operated by the same team that operates Elude Mail, an anonymous email service on the same URL. The three cryptocurrencies supported by Elude Exchange include Bitcoin (BTC), Monero (XMR), and Litecoin (LTC). Unlike some other darknet-based exchangers, there is no need to create an account to perform a swap, and it is not necessary to provide a refund address.

Elude is well-known for being extremely privacy-focused, with all their servers operating entirely over the Tor network. The site does not use JavaScript and no data is collected or stored during exchanges. Elude also provides a Bitcoin mixing service for those looking to break blockchain links in their BTC. The exchange portion of the site features an extremely simplistic design but also contains some advanced features to help users maximize their privacy during the swapping and/or mixing processes.

Elude was initially known as Elude.in, a privacy-based email service, and added their Monero exchange functionality about four years ago, in 2018. Since then, Elude has become well-known for operating a trustworthy and fair exchange. A member of their team is frequently active on the Dread darknet forum, ready to answer customer questions and address concerns. The team has demonstrated a commitment to maintaining the privacy of their users and is generally well-regarded among the darknet community.

The Elude Exchange features six coin pairs for swaps: BTC->XMR, BTC->LTC, XMR->BTC, XMR->LTC, LTC->BTC, and LTC->XMR. Users can choose to split reception of their swapped coins among up to five addresses and can also specify the delay they want in the transaction, from anywhere between 30 minutes and 24 hours. This makes it harder for adversaries to detect when a coin swap may have occurred, creating more privacy for the user. Elude also supports a coin mixer for BTC, specifying the number of addresses for which they want to split a deposit, the transaction delay, and delay between each transfer.

The Elude Exchange collects roughly 4% from each transaction via their exchange rates. There is no limit on the size of deposits and provision of a refund addresses is not required. The Elude Mixer charges a service fee that is randomly set between 1% and 3% for each mixing session. This makes it harder for blockchain analysis services to detect which transactions are the result of mixing sessions.

In all, the Elude Exchange is regarded as one of the most trustworthy anonymous crypto swapping services on the darknet. It has built a reputation of providing consistent, dependable service over the course of more than four years, which makes it one of the longest-running of such services still in operation. At an average 4% swapping fee, it is also one of the cheapest such services. Another great aspect of Elude is that their operators are easy to get in contact with, whether it be through the site itself or their own section on Dread, in which they maintain a highly active presence.