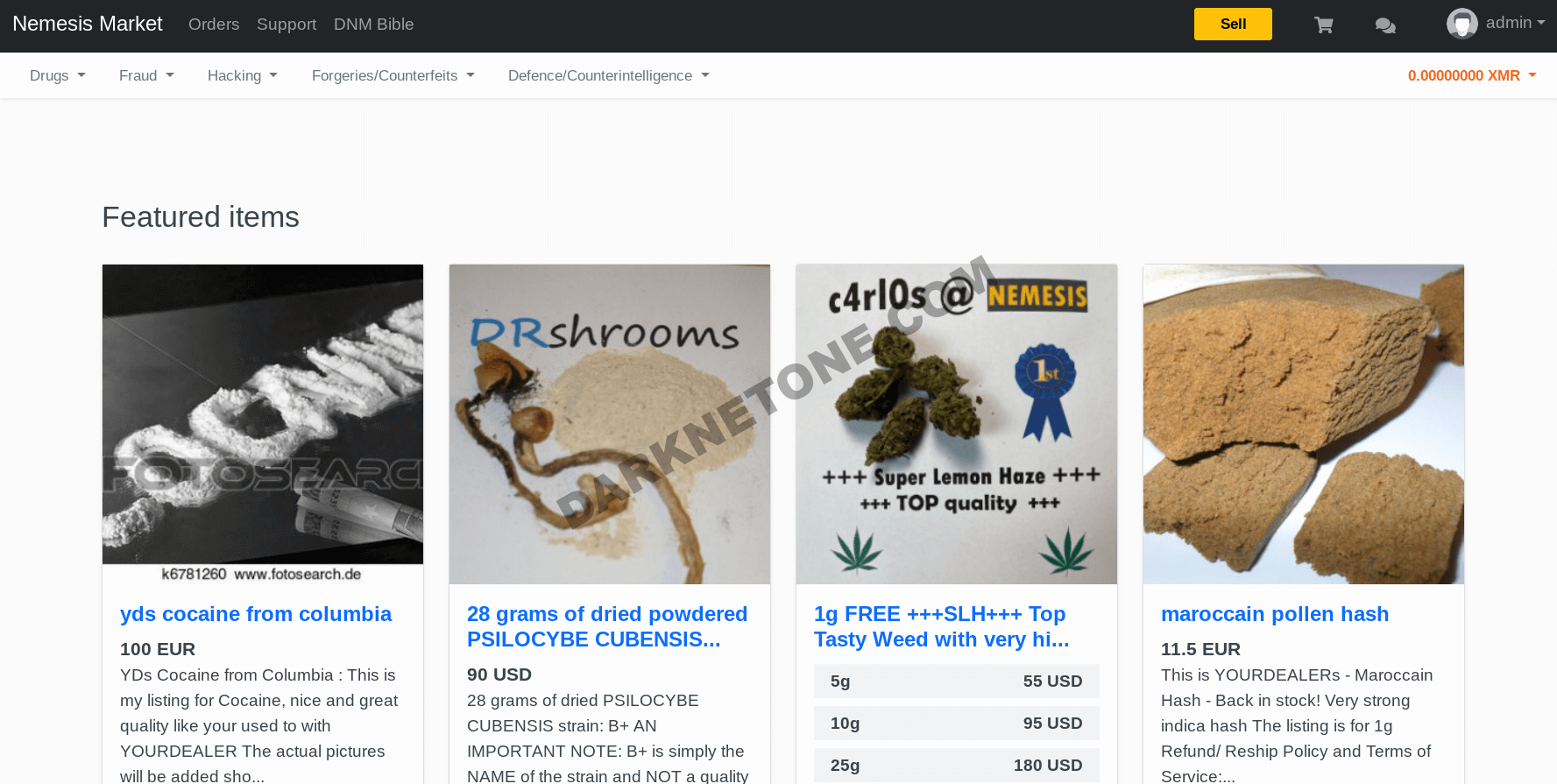 Nemesis Market is a new and small darknet market that features a bare bones layout and purchase experience. The market has one rule only: no child porn. This means that pretty much anything else goes – except it hasn’t yet – because the market remains short on vendors in a big way. Though Nemesis Market is easy to navigate, it is fairly unstructured, and you’ll find a mishmash of novel listings with unconventional descriptions among the usual drug- and fraud-related listings. Using a simple per-order payment system and supporting XMR only, the market provides enough of an interface to attract just a few brave customers, for now.

For a complete guide on Nemesis Market please visit here.

The market’s admins are not completely unaware that Nemesis is lacking and appears to be a half-finished product. Among the features promised to be released in the near future are “auto-withdrawal, dark mode, adding Bitcoin, adding Recon reviews, notification for comments, better messaging system, forum, exchange, fixing 2FA, better search engine, and a lot more…” For now, it is still worth looking at because it defies the usual standards for listings and their descriptions, allowing vendors to get creative as to what they want to attempt to sell for XMR. If the admins make good on their promises, Nemesis Market has potential to attract a wider audience as the result.

As it is still a smaller market, Nemesis is severely lacking in listings, but it does have categories configured for items not as readily seen on markets in 2022. Listings are divided into Drugs, Fraud, Hacking, Forgeries/Counterfeits, and Defense/Intelligence. Each of these is divided into several smaller categories. The most popular subcategories belong to Cannabis, Stimulants, and Opiates (as they might on any other darknet market), though the largest is the Other subcategory for Fraud which contains the usual how-to guides that can be found most anywhere else. Nemesis does have some interesting “hacker for hire” listings and services, along with some data dumps and malware. In this regard, it is one of the last “wild west”-type markets to embody the “anything goes” spirit.

Nemesis Market is a Monero-only darknet market that uses a very straight-forward Direct Pay system. This means that funds are not deposited into a central wallet system but rather sent to an address that represents the payment for an order. The funds are then held by the market until the order is finalized by the buyer, at which point they are released to the vendor (minus the market fee).

In all, Nemesis Market is promising but still a work-in-progress and needs at least a few more months to flesh itself out. Perhaps by then it will be at the point where it should have been upon opening. We like the fact that its trying something different, but it has yet to really establish itself as being trustworthy among the community, and until then its best left to adventurous types to experiment with on their own.