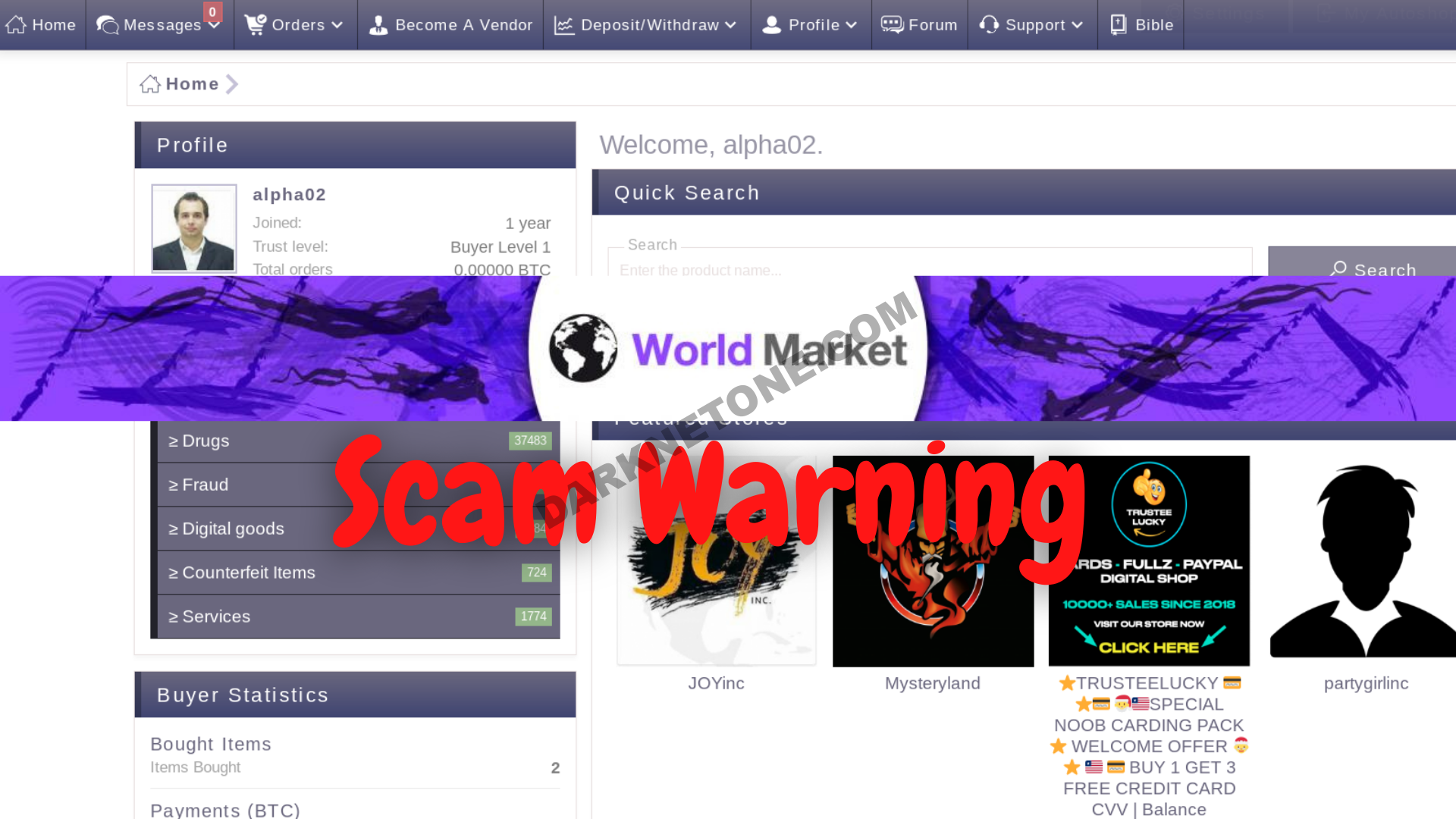 Just a few days after Dark0de Market has exit scammed (and 3 weeks after we publicly warned users to withdraw their money from Dark0de) a bombshell confession from a former Nightmare Market admin has come to light.

Under the title “The truth about World Market – take it from someone who knows!” the former admin who exit scammed himself back in 2019 has published a shocking revelation of the connection between World Market, Nightmare Market, Royal Market and a brand new darknet market Kerberos Market.

I was one of the founding members of Nightmare Market and have been part of World Market until very recently, when Lovelace suddenly cut ties with me and refused to give me the money I am owed. So now I am blowing the whistle on these assholes!

For those who don’t know, Lovelace (Admin of World) was part of Nightmare Market from the start and one of the main benefactors of the exit scam. At this point there was some disagreements between the old Nightmare team which split and went to form two new separate markets. One was Royal Market (many people already worked this out) the other was World Market. They launched at similar times, makes sense right! Royal Market just sucked at marketing.

Exit scam money from Nightmare was used to launch World Market which is why it had adverts fucking everywhere from the start. Most new startups dont have this kinda funding and dont grow this quickly. Think about it! The plan from the start was to exit scam within 2 years while setting up a new market then rinse and repeat the process. Lovelaces new market launched a few weeks ago and it is already spending a load of money on advertising. IT IS KERBEROS MARKET! Note some similarities between the two markets when you look closely as some of the terms and conditions. They try to make it look super different otherwise though.

Now Darkode is gone, World is preparing to exit Lovelace +_team are ready to start scamming all over again with Kerberos Market. Jacking up the vendor bond to $3k is a quick way for World to make a quick buck knowing that some vendors will be desperate enough to pay. DO NOT PAY! World won’t stick around for more than a few months – as soon as Kerberos is big enough they are gone and so is all your money! Mods like makarov are already working on both markets!

Dont think just cause the site had a makeover recently that its not going anywhere! This reskin was ready 6 months ago, I fucking helped make it. It was saved for a later date to make it look the loads of investment was going into the site to trick vendors and buyers. Dont be naive! Selective scamming by the market has been happening for ages but mostly targeting small vendors and first time buyers. Literally tens of thousands of dollars stolen this way already. Lost deposits, accounts locked, disputes lost by vendors but customers never receiving money back (makarov is specialist at this).

Oh and to the admins of Archetyp, Bohemia, ASAP and AlphaBay you wanna know who been ddosing you lately? If you hadnt guessed by now WORLD MARKET! They paying guys every day to fuck you! They were attacking Darkode too but no need any more!

You can call all of this FUD if you want but ask yourself why everything makes sense. If Lovelace didnt betray me I would never be posting this, but fuck him. I want his empire to crumble. Of course World will deny eveything but they know everything I say is 100% true.

This is not a Q&A so I not saying any more after this but time to set the record straight! This post probably get removed soon so screenshot before World pays off Dread admins to take it down. Signed post with Nightmare Market PGP which only a few people ever had access to.

The post has quickly was answered by a few darknet markets admins including the Dread moderator, Paris-

… I must say this is quite the bombshell.

/u/Lovelace it seems you just got fucked by previous staff. The signature is valid and on the official /u/nightmaremarket user account. This isn’t FUD and confirms other information we had but didn’t have the proof to go forward on. We finally do. A perfect example of needing to keep your past more hidden and making sure your staff isn’t going to fuck you over.

Obviously the World Market and Kerberos (Royal Market was already banned) will be banned from dread, ad disabled, removal from Recon, and I’ll be pinning this as an announcement. Don’t be fooled. This is BIG fucking news here. I think this is the first case of something like this happening where it’s so cut and dry. I’m not going to ban accounts so they can respond… but… it’s impossible to counter this in my mind.

If you are a user or vendor of World Market the boat will be burning soon. Jump ship while you can with what you can. It’s going to get nasty.

DeSnake, AlphaBay admin has also replied to the post-

I only saw this post as I logged out of Dread. I did not get a notification for some reason. /u/Paris

I can confirm the information you have said is what is known and has been discussed many times, I have personally discussed and shared with Paris that World are/were in the same group/loosely affiliated Royal Market. Part of that group was also the DDoSer parchezzi. They are all the same cloth. Also that Lovelace is in fact Octavian (Pax Romana market that exit scammed). On a side note that information that he is Octavian I gave to Dark0de too before and what did they do? They spammed World market accounts with that same information. That is part of how I knew both of these markets are engaged in DDoSing and attacking each other.

I previously publicly stated on Dread there are two markets that are actively DDoSing – World and Dark0de. More of what I have said is coming to light.

Actually the team behind World have another 2 markets which I strongly believe to be them in disguise based on backend response similarities, language structuring and overall manners. But as the original poster said they do try to make it as different as possible.

This post should be crossposted to /d/DarkNetMarkets (/u/samwhiskey /u/HumanPie /u/dontlaugh) and finally some action to be taken against World /u/Paris. Many times World have been accused by multiple admins, even I sniffed out their attacks previously. I believe it is time for the Dread admins to take matters in their own hands and ban this market as they are clearly a cancer to the community. /u/hugbunter

I also still have a vulnerability they have not closed (that Dark0de had too) and they refuse and are not interested in any way shape or form of paying/honoring a bug bounty for it or to know what it is. There is no point in bug bounties requirements when no one is following them.

P.S. To remain factual I believe at least to some extend the attacks against ASAP were by someone else as I know for a fact that ASAP admin is really close ties with Lovelace. Either that or chacal is getting backstabbed which is a very probable scenario given how gullable he is.

World Market was in a few controversies and scandals in the past, including one where it was banned from Dread for a few months, and recently blamed Dark0de Market for the massive DDoS attack World Market has suffered, but this one might cause World Market to make an exit scam.

As with Dark0de Market, we strongly suggest users to withdraw their funds as soon as possible from World Market and use any other darknet market that is on our list.

22 thoughts on “World Market Prepares For an Exit Scam”